Xecuter SX Can work and hack New Nintendo Switch, now it can be pre-ordered, and the new product will be released at the end of this year.

Confirmed: New Nintendo Switch and Patched Switch Can be Hacked!

The price is pre-order price, NOT Full price, and detailed release date not clear, if you can not accept, please do not make the order!

TX has recently taken the time to demonstrate to us some of their Work-In-Progress. Notably for ‘patched’ and ‘mariko’ units which is very advanced, and works flawlessly. We were not given a firm date or prices yet, but knowing TX we know the price will be very reasonable. We also saw early beta for Switch Lite console as well. 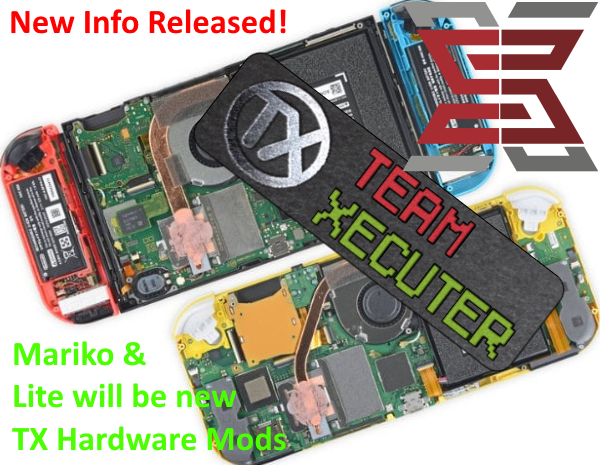 First Off: It is a hardware mod. TX went back to its roots, and this solution is a device you need to install inside your Switch.

From what we could tell the install looks ultra simple and almost plug and play. When pushed about the install requirements, TX held back from claiming its fully solder-less, stating clearly that this particular design will always benefit from a few simple solder connections, versus the original intent of fully solder-less (at least for the classic model which is the unit we got to inspect).

In other words, a fully solder-less install is potentially possible with the classic models however it is not recommended by TX due to long term reliability concerns (we will cover this more in-depth at a later date, once we have our preview unit in our hands and put it thru some tests)

Second Point: There is one device for Patched and Mariko unit which is probably under production (see point three) and should be available soon

They plan to release 2 devices; one for all classic versions (original, patch and mariko) and one for the Switch Lite.

Third Point: I really pushed for a release date, but TX refused to confirm anything during our meeting. From what I understood, even though it seems to be currently under production, because all sorts of things can occur in the factory during production, they will not commit to a date to me or their resellers until they are certain they can deliver on time enough stock to meet the demand.

I guess I can only respect that, this is probably why they did not announce anything yet, and we should know more once it is finally officially announced on their TX website.

30 other products in the same category:

My NS is patch ,not new ver,

Was this comment useful to you? Yes No
Report abuse
Reply from My Store:
Your console is possibly patched. To be 100% sure you should try runing the Fusee Gelee exploit on it.
Ziray Zhang

i want to know how long should i wait for it

Was this comment useful to you? Yes No
Report abuse
Cynthia Tollenaere

Was this comment useful to you? Yes No
Report abuse
Dani Asensi Recuenco

Wait for my order

I Need the product to hack the my patched switch, I can wait

Was this comment useful to you? Yes No
Report abuse
Write your review!